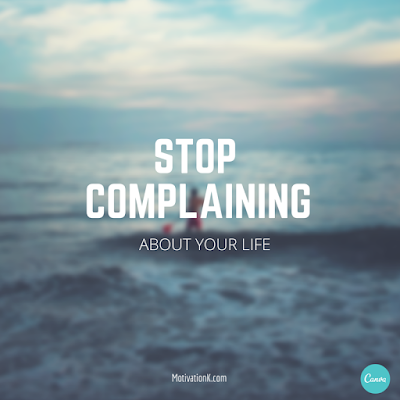 I never understood the purpose of complaining. From a shallow perspective, I get that it’s our (meaning human beings) way of relieving frustration caused by people or circumstances. At some point, complaining seems like our only option to feel better and get out some of that pent up aggravation. But if I can speak frankly (which I always do) nobody wants to hear that mess! Especially when the person doing the complaining is not actively working to fix their situation. Let me tell you guys a little story…
I had this one friend who, right off the bat, I vibed with. Our personalities were beyond similar. We had the same career, relationship, and spiritual goals. To me it was the start of a great friendship. She had all the makings and characteristics needed to be an alpha female. Intelligent, beautiful, and body that would make Lira Galore wish she paid Dr. Miami more than one visit. But for some reason my friend, who for the sake of this post I’ll refer to as Wanda, couldn’t see her own potential. Every day came with a new complaint. “My hair looks awful.” “I’m gaining too much weight.” “I can’t keep up with my class work.” “This class is too hard.” “I’m not making any new friends.” The list was endless. Now for the first few months of our friendship, I was very sympathetic to her situation. Wanda transferred to a new school, fairly new environment, and a different culture to say the least. For any person, a major life change can come with a host of different emotions: anxiety, nervousness, scared, to sum it up fear of the unknown. Understandable. A new situation can be difficult for anyone. So like a good friend, I sat and listened and gave her some advice that I hoped she would, at the very least, take into consideration. BUT, it got so bad that whenever we would hangout 98% of the conversation somehow managed to land on her complaining about this, that, and the other. How unfair life was to her; how she is always given a bad batch of apples. For the most part, I continued my efforts in trying to help her see how and in what ways she could take control of her life but GOLLY it was mentally draining. It’s hard to be friends with someone with a dark cloud over their heads without it moving over to cloud your day.
Like I mentioned earlier in this post, I understand that complaining is natural and can be (and I say this very VERY lightly) a form of therapy. However, what I do not understand is how one person can be given all the tools and resources to make a change that will alleviate the problems that cause you to complain and yet not use them? Wanda: My hair looks awful! Me: Girl, you know I do my own hair, let me hook you up. Wanda: I’m gaining too much weight. Me: I’m at the gym 4 times a week; I’m in need of a new workout buddy, join me! Wanda: I can’t keep up with my class work; the class is too hard. Me: I took that course 2 semesters ago, same professor and everything. I still have the material, you can have it. Also if you need help let me know and if I can’t, there’s another girl who took the class with me and she’s a certified genius. I’m sure she’d be happy to tutor you. Wanda: I’m not making any friends! Me: MAYBE IT’S BECAUSE YOU COMPLAIN TOO DAMN MUCH! Okay okay, so I didn’t say that last part but HO-NEEY it took every Christian bone in my body not to.
You want to know the most frustrating part of her entire situation? Homegirl could recognize the things that were making her unhappy. She could recognize the genuine people in her life that wanted to help and see her succeed. And she could recognize that the only person stopping her was herself. Yet none of that knowledge was used to fix her situation. Wanda had gotten so comfortable in her own struggle that although she knew the issues in her life and knew the solution, she was still assisting in making her own life miserable by not being proactive.  It took me a long time to realize that some people are beyond another mans help. There’s a saying out there which stays: No matter how close you bring a horse to the stream, you cannot force it to drink. Wanda, no matter what she stated verbally, was not at a point where she was ready to change her situation. Her struggle became her identity, and if she let go of that, she would be letting go a part of herself that she wasn’t used to being without. Instead she continued to assist in her own struggle until she decided enough is enough. Le Sigh.
MORAL OF THE STORY: You can’t change your situation if are constantly assisting in your own struggle.
Have you ever met someone like Wanda? What did you do to help? Leave me a comment below!